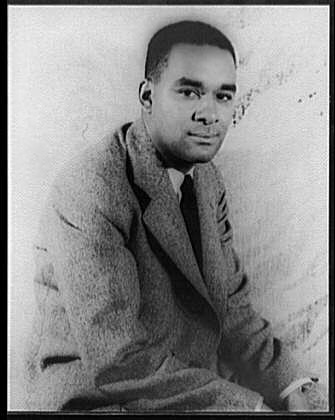 So, what award-winning author spent a large portion of his childhood/adolescence living with his grandmother at 1107 Lynch St? Well, that author would be Richard Wright (1908-1960).  Wright was born in Roxie, Mississipp–a town near Natchez.  His parents moved Wright and his siblings to Memphis, Tennessee in 1914 and returned to Mississippi in 1916 after Wright’s father abandoned the family.  Wright lived with his maternal grandparents in a two-story, frame house near the current intersection of John R. Lynch Street and Dalton Street. Wright describes his grandmother’s house in his autobiography:

“Granny’s home in Jackson was an enchanting place to explore. It was a two-story frame structure of seven rooms. My brother and I used to play hide and seek in the long, narrow hallways, and on and under the stairs.  Granny’s son, Uncle Clark, had bought her this home, and its white plaster walls, its front and back porches, its round columns and banisters, made me feel surely that there was no finer house in the round world.”

During his time in Jackson, Richard Wright attended Jim Hill Primary School, Smith Robertson Junior High School, and Lanier High School.  As a teenager, Wright had jobs in Jackson that included ticket taker at the Alamo Theater and bellhop at the Edwards Hotel.

Despite a troubled childhood, Richard Wright grew up to become an esteemed novelist–penning books including the acclaimed Native Son and autobiography, Black Boy.  His struggles with the effects of racism in the South are evident in the harsh, blunt nature of Bigger Thomas–Native Son’s main character.  These painful stories proved successful for Wright as Native Son sold 215,000 copies within three weeks of being published (1940) and Black Boy became the 4th best selling book of 1945, selling nearly 550,000 copies.  Native Son spent 3 months as a Broadway stage play at the St. James Theatre in New York City.

Thanks for participating in today’s trivia! We’ll have more trivia for you next Thursday, but be sure to check back for blog updates.

Richard Wright: The Life and Times by Hazel Rowley