In 1916, the city of Jackson purchased an undeveloped, 79-acre parcel of land from Samuel Livingston (hence, the name). In 1918, the city decided to use this land for a park. Although not many improvements were made in its first couple of years of existence, the city’s surging population of the 1920s and funding from the Works Progress Administration led to many infrastructure & facility investments in Livingston Park that included “elaborate landscaping, stone buildings, a zoo, a man-made lake with a swim beach, a[n 18-hole] golf course and dancing pavilions.” (Kimbrough)

The park also included a rose arbor with rose bushes and climbing roses that was situated between the swimming lake and the entrance to the zoo.

By the way, the zoo came to fruition in this park through the efforts of some animal-loving firemen. In 1904, city leaders voted to establish a full-time professional fire department. That same year, the Central Fire Station was erected behind City Hall at the intersection of President and Pearl Streets. Over the years, the firemen began to gather stray animals and shelter them at the firehouse. These animals included rabbits, pets, a fox, squirrel, deer, raccoon, and alligators. Once their collection became too large to be housed at the station, they moved these animals to Livingston Park–ultimately sparking the creation of the Jackson Zoo.

Today, Livingston Park in under the auspices of the Jackson Zoo and is available for events and family gatherings.

Thanks for playing today’s WESTerday Trivia! If you’d like to experience Livingston Park, take a visit to the Jackson Zoo. 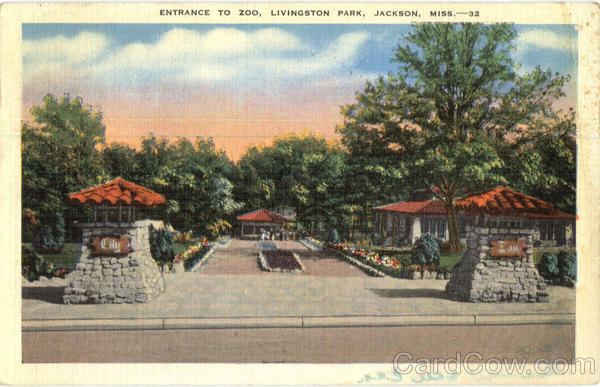