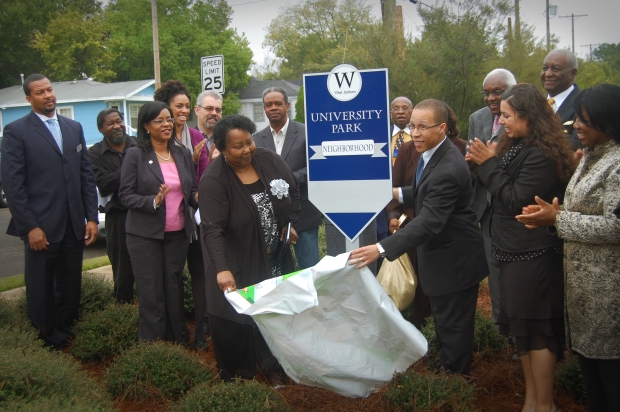 Community members, JSU Students, BankPlus representatives, and friends unveil the new University Park Neighborhood Sign. It is hoped that this sign will be a model sign for the neighborhoods in West Jackson. (photo by Aaron Thompson/JSU)

Today, a small crowd assembled to witness the unveiling of the University Park Neighborhood Sign.  Clouds plastered the sky as rain drizzled to the ground.  Nevertheless, those in attendance were all smiles in anticipation of this occasion.  The ceremony was originally planned to take place in the parking lot of BankPlus, but, due to the rain, it was moved indoors to the sanctuary of Epiphany Lutheran Church.

Betty Lyons, president of the University Park Neighborhood Association began the event with a warm welcome on behalf of the neighborhood.  She even invited a couple of neighborhood residents to provide some comments.  One of these residents had written two books while another revealed that she was a textile artist before she shared a beautiful sample of her work with the audience.  It was actually heartwarming to see that such creative people lived in this West Jackson community.

Next, Sargent Perry Martin addressed the crowd with a brief history of the sign.  He explained that he grew up in University Park and that there had been a neighborhood sign on the corner of John R. Lynch Street and Dalton Street years ago and that it was a pleasure to see the sign reincarnated on the corner of Dalton and Isaiah Montgomery.

For more information on the background of the sign, check out our previous blog post.  Thank you to all who attended. This is definitely the sign of West Jackson and hopefully another sign of greater things to come!

One thing should be noted: this sign isn’t intended for just one neighborhood.  This sign will hopefully be adopted by all neighborhoods in West Jackson.  The cost of the sign is approximately $1,700 and it can be customized with the name of your neighborhood.

Special thanks to Epiphany Lutheran Church for opening their doors to us to shelter us from the rain on such short notice! 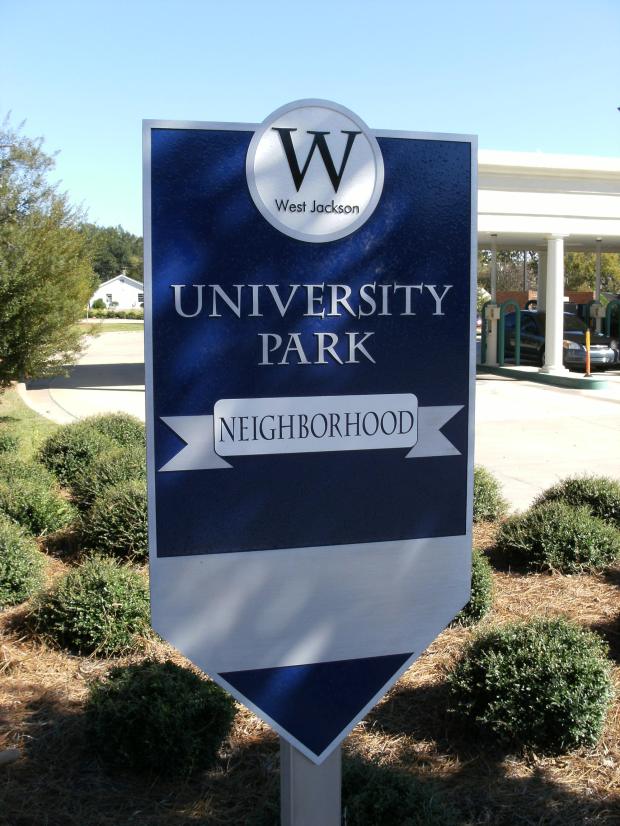 Picture of the new sign on a sunny day. 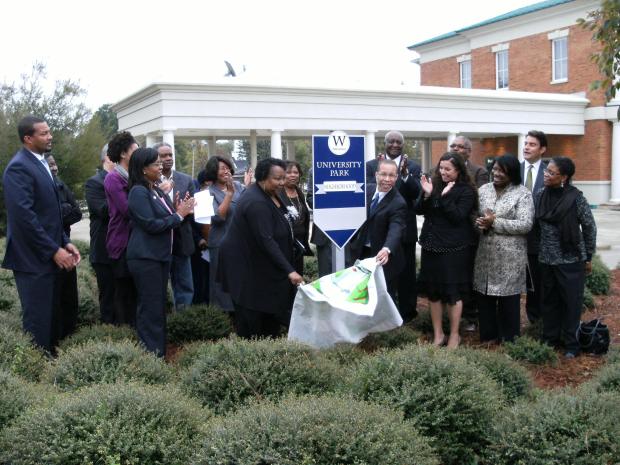