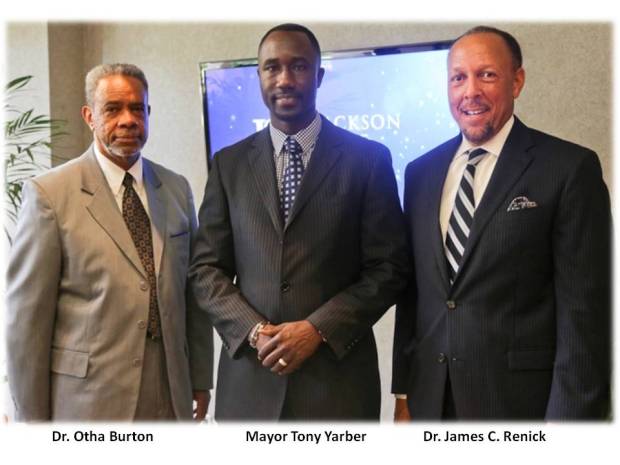 Representatives from Jackson State University and the City of Jackson held a news conference at the Mississippi eCenter@JSU on Friday, June 11 to announce their collaboration in crafting the Master Plan for the 1 percent sales tax revenue.

“Jackson State University, for a long-time, has been a lasting partner, not only with the city, but with the state of Mississippi,” said Jackson Mayor Tony Yarber.

“This new direction will be lead by JSU’s Institute of Government,” said Yarber.

JSU’s Institute of Government is lead by founding Executive Director Dr. Otha Burton. Burton has been in the forefront of carrying out the Institute’s mission of providing leadership development, research, consulting and training aimed at assisting urban regions and public service organizations in delivering effective and efficient services that meet the needs of the community.

“This is indeed an exciting opportunity to be able to work with the city from the university perspective,” said Burton. “There’s a lot of important projects that need to take place through our community to make it the kind of community we’re proud of.”

“We are Jackson’s public university,” said Renick. “We’ve had relationships with the government for some time, but it’s really wonderful to see the chief executive of the city call on a resource like the university to ensure that Jackson State continues its relevancy. We’re looking for more partnerships. This is the beginning of things yet to come.”