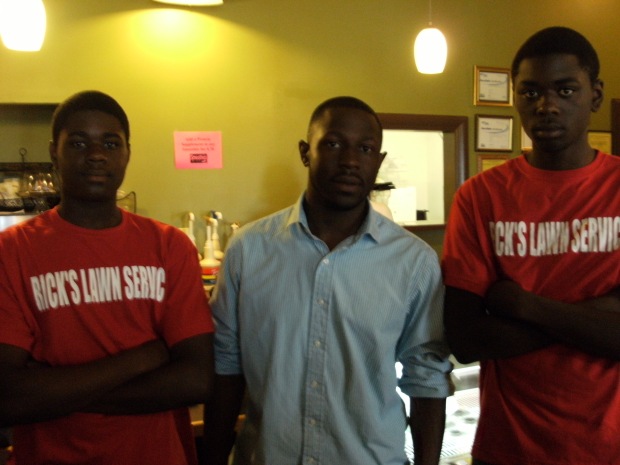 Ah, summertime! It sure came early this year in Jackson.  School is out, the grass is green, and it’s time to work.  At least that’s what brothers Ian Jackson, 15, and Rick Jackson, 18, plan to do this summer.  Rick and Ian are hoping to earn some money this summer with Rick’s Lawn Service (601.949.7094) by enduring the Mississippi heat to freshly manicure your lawn while you kick back, relax, and enjoy the finished product.  During the lawn care off season, Ian attends school at Blackburn Middle School while Rick attends Jim Hill High School.

The teenage brothers aren’t endeavoring alone. Johnathan Griffin is serving as a mentor to these young men as they venture into the world of entrpreneurship.  Johnathan has an interesting story to tell.  He grew up in West Jackson on Fourth Avenue.  At age 11, he met a man named Dr. Bill Cooley who he considers a mentor to this day.  At the time, Dr. Cooley was a professor at Jackson State University’s College of Business.  Dr. Cooley also served as dean of the same college.  Even greater, Dr. Cooley has purposefully located the headquarters for his company, Systems Consultants, at the corner of Broad Street and Roseneath Street to demonstrate his support and passion for West Jackson.

Ok, back to Johnathan.  Johnathan spent his first two years of high school at Jim Hill and the remaining to at the highly competitive Mississippi School for Math and Science in Columbus, Mississippi.  After high school, he attended Morehouse College where he enrolled into their 3/2 Civil Engineering Degree program.  In this program, he spent 3 years in Atlanta at Morehouse College and 2 years in New York City at Columbia University.  His final GPA: 3.85!  These accomplishments alone put a grand smile on Dr. Cooley’s face. But we know that Johnathan has a lot more in store.

Johnathan is in Jackson for the summer and is working with local architectural firm Duvall Decker & Associates on their innovative housing development in Midtown.  However, when fall approches, Johnathan will be hitting the road again.  This time, he will be heading to Nashville where he has accepted a full academic scholarship to Vanderbilt University.  High school diploma. Check. Bachelor’s degree in Civil Engineering from outstanding schools. Check, Check. Next on the to do list: Master’s Degree in Civil Engineering & Construction Management from Vanderbuilt.  Keep pressing forward Johnathan!

And that brings us back to Ian and Rick.  These two brothers from Robinson Street have the potential to have a story just like Johnathan’s. Two young men from West Jackson who will excel in school and will grow up to help their community excel.  How do you ensure successful entrepreneurs in West Jackson? Well, you’ve gotta start ’em young.