A few weeks ago, cars were lined up everywhere along W. Pearl Street, Dalton Street, and the Metro Parkway.  The occasion was Class Day, or as we called it in middle school, graduation!  Families and friends hurried in to watch their loved ones receive awards and certificates, many of them hoping that these accolades would translate into diplomas and scholarships four years from now.  As the many people filed into the Blackburn auditorium to watch their students ceremoniously pass from eighth grade to ninth grade, many walked by a site that will be the future of Blackburn.  Just as the students leave the school with a knowledge upgrade that was instilled over the past three years, Blackburn Middle School is receiving an upgrade of its own.

Construction on the new Blackburn Middle School began this past January.  The new structure will be a 102,576 square foot modern wonder, will stand two stories tall, and will be located just west of its current location on West Pearl Street. The building will feature twenty-four regular classrooms, five science labs, two technology labs, and administrative offices to service the 400+ middle school students.  There will also be a one story support building on the campus that will house boys and girls’ athletic facilities (including locker and shower rooms), cafeteria, library/media room, band room, choral room, strings room, art lab, and administrative offices.  In other words, the main building will be for the purposes of exercising the left brain while the support building will be used for exercising the right brain and physical body.

Other features on the new campus include a walking track, practice football field, and tennis courts—elements that currently exist, but will be brand new once construction is complete.  There will also be new sidewalks constructed for the safety of the students who walk to school and with ample trees and landscaping to top this project off, the new Blackburn will undoubtedly be a pleasant learning environment for its students.

The total cost for the project is $16.4 million and is being funded through the citizen-voted 2006 school bond issue.

Special thanks to Jackson Public Schools for information included in this entry. 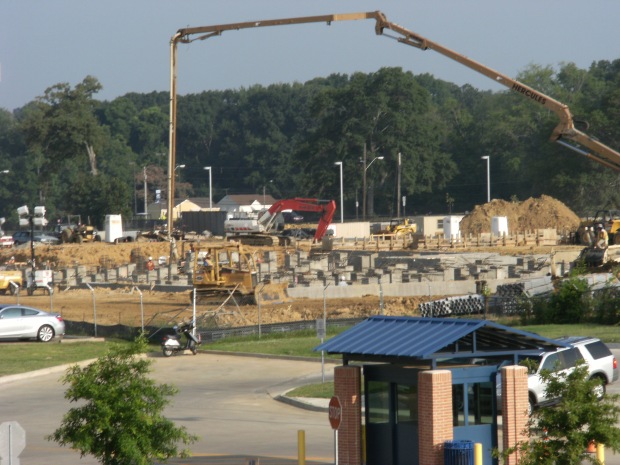 View of site from Pearl St.

View of site from Pearl St.