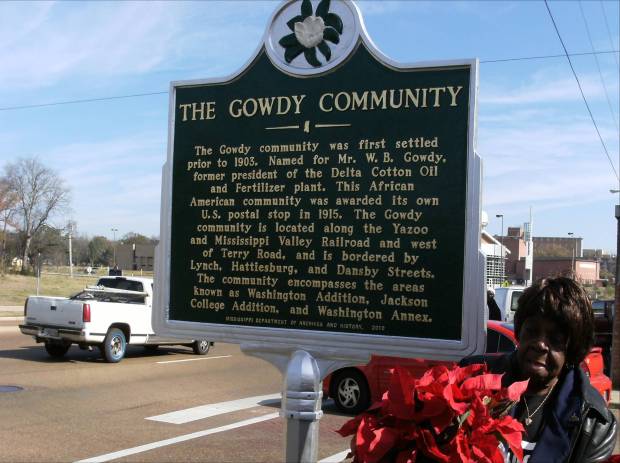 The answer to today’s trivia is a.) Gowdy.

The marker is the result of months of research by Dr. Kimberly Hilliard of CUBD and the oral histories of Washington Addition Residents Willie Mae Shirley and Blonda Mack.  Once the research was done and marker approved by the Mississippi Department of Archives & History, it was time to raise funds for the $1,700 marker.  Washington Addition residents contributed funds from their own pockets and rallied the support of their neighbors to purchase the marker.  The corporate contribution of Entergy Mississippi, made possible through Louis Wright, completed the community’s fundraising effort.  The historical marker was ordered and its installation was celebrated today with a public ceremony.

For more information about Gowdy/Washington Addition, make sure to read the research paper of Garrad Lee. Lee, a Jackson native, is currently persuing a Master’s degree in History at Jackson State University.

The marker reads as follows:

The Gowdy community was first settled prior to 1903.  Named for Mr. W.B. Gowdy, former president of the Delta Cotton Oil and Fertilizer Plant. This African American community was awarded its own U.S. postal stop in 1915. The Gowdy community is located along the Yazoo and Mississippi Valley Railroad and west of Terry Road, and is bordered by Lynch, Hattiesburg, and Dansby Streets. The community encompasses the areas known as Washington Addition, Jackson College Addition, and Washington Annex.