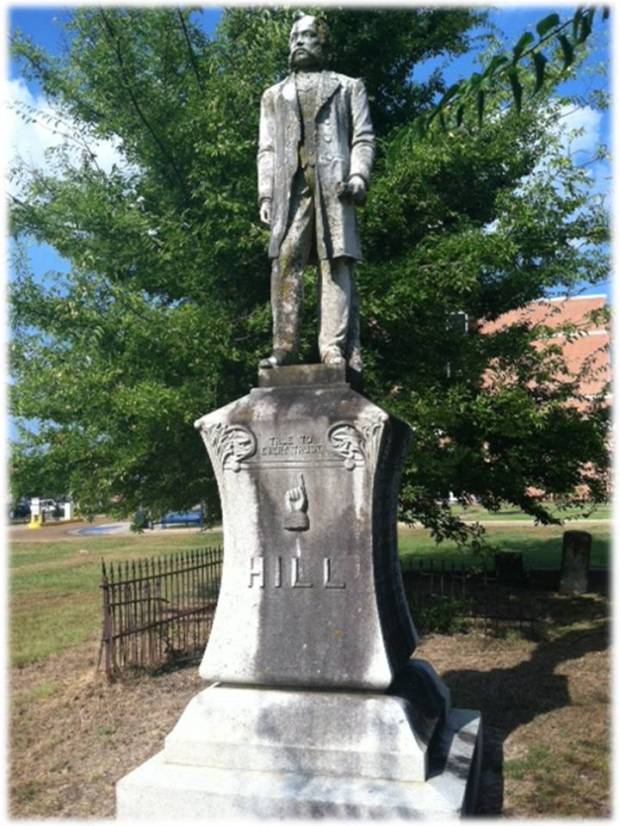 All of the answers represent men that have had substantial influence in the state. They all represent the names origin of local high schools. But the only one that is buried in Mt. Olive Cemetery is Jim Hill.

James “Jim” Hill was born a slave on the J. Hill Salem Road Plantation about two miles from Holly Springs, Mississippi. Growing up, Hill received an elementary education of reading and writing from his master’s two daughters. He continued his education while working as a youth in the railroad shops of Holly Springs.
In the early 1870’s, Hill joined the Republican Party and his career in Mississippi politics took off. He was elected to the House of Representatives, where he was chosen sergeant at arms and speaker of the house. In 1871, he was given a seat in the Mississippi Legislature. Two years later, he was elected and served as Secretary of State of Mississippi from 1874 to 1878. After his term ended as Secretary of State he served as Collector of Internal Revenue in Mississippi as well as the registrar for the Land Office in Jackson.

Hill’s political career ended with the Land Office in Jackson and as a sponsor of projects directed toward the advancement of the black race.

In 1885, Jim Hill with the help of J.J. Spelman, organized the Colored Fair Association. The fair lasted four days with the cooperation from state officials and white merchants of Jackson who subscribed over a thousand dollars in premiums. A wide variety of stock, agricultural products, and needle work were displayed.

James “Jim” Hill never married and died in 1901. He was buried in Mount Olive Cemetery on Lynch Street in Jackson, Mississippi.

In 1912, Jim Hill began as an elementary school on Lynch Street for the purpose of educating the youth in West Jackson. It was later relocated to a new building located at West Pearl and Dalton Street (now Blackburn Middle School). The current location of Jim Hill High School was erected in 1966 on Fortune Street.

Thank you for playing WESTerday Trivia!